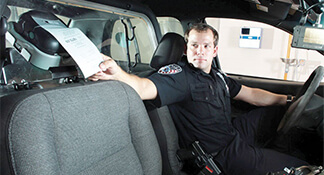 Located on Long Island, about 70 miles east of Manhattan, the Suffolk County Police Department has jurisdiction over 560 square miles, protects 1.4 million residents, and collects between 70,000 and 75,000 pieces of evidence annually.

“In 43 years, we’ve never lost a piece of evidence,” said officer Michael Beam, the firearms and narcotics control officer who works in the Property Section.

Because of its sterling reputation, the Suffolk County Property Section has earned numerous awards and national recognition. It has been featured on Discovery Channel’s “Curators of Crime” program and is used as an example in seminars conducted by the International Association for Property and Evidence. Officials from more than 30 law enforcement agencies have visited Suffolk County to learn about how to improve their own evidence management procedures.

Challenge:
Although considered one of the nation’s best, the Suffolk County Police Department has made improving procedures for identifying, managing and accessing the vast amount of evidence within its system a continuous process.

In 1988, the county became the first in the nation to implement the ACE computerized evidence management system. Processes were further automated in the 1990s when a thermal label printer was added to the system to automatically create evidence labels and eliminate the need for manual labeling.

In late 2002, the Property Section began tracking evidence with barcodes for the first time. As part of the transition, the department began an upgrade from its original ACE DOS-based evidence tracking software from Software Techniques to a newer, Windows-based version called WinACE, which supports bar code data entry.

When police officers collect evidence at the scene of a crime, they bring it back to their respective precincts, where it is signed in and locked up. Lost or stolen property recovered by officers is also submitted to the precincts.

Each day, the assigned officers of the department’s Property Section collect these items from the precincts and bring them to a 30,000-square-foot warehouse. More than 220,000 items are stored in the warehouse where they remain untouched until they are released, destroyed, or requested by a police officer or the district attorney’s office. (The oldest invoice of evidence in the warehouse is from an unsolved 1931 murder.)

Every box, every envelope, every item—from a tiny piece of glass to an item as large as a boat—must be labeled before being stored in the warehouse. Eleven civilian Evidence Control clerks and five police officers have the responsibility of recording evidence into the system, then maintaining records and safeguarding the evidence until it is needed.

Solution:
Items were labeled with a dot matrix printer until 1995, when the department installed its first thermal label printer, an Eltron QB440 (Eltron International merged with Zebra Technologies in 1998). The lone printer performed flawlessly, producing more than 70,000 labels annually, but the department decided to purchase a new unit as part of its system upgrade.

“The printer we were using worked great. We got all we wanted out of it and decided to get a new printer when we put in the new system,” Beam said. “We can’t take a chance on our equipment. We can’t stop collecting evidence because something goes down.”

“barcodes are central to WinACE. They are the keys to both accuracy and efficiency. This is why WinACE operates best with a Zebra printer,” said Brian Muller, vice president of Software Techniques.

“WinACE and the Zebra 2746e printer easily adapt to the wide variety of shapes and sizes of property by allowing for multiple label sizes. Once barcoded, the software can easily maintain an ironclad chain of custody from inception to final disposition.”

But just because there is one invoice number doesn’t mean there is only one label to print. Some invoices do come in with only one item; others, however, can come in with hundreds of items on it. In those cases, a label has to be printed for each item.

For example, officers at the scene of a motor vehicle-bicycle accident would gather the bicycle, a helmet, a piece of clothing, a shoe, a watch, pieces of glass, and a wallet for their investigation.

All these items must be incorporated into the invoice. There would be one invoice number for all six items, and each item would receive a label and stored in a different section of the warehouse.

Each label has a barcode beneath the invoice number to facilitate automated tracking. Items such as a tiny piece of glass or a small piece of hair are placed in an envelope with a tracking label.

The evidence is signed out of the warehouse with a barcode scan, which records the transfer in the software system.

“The quality of the label is absolutely flawless. That is something you need when you present your evidence in court,” said Beam, who noted defense attorneys are impressed by how clean, detailed, and organized the evidence labels look. “It makes for a better presentation when you come in with an organized piece of evidence that is labeled correctly.”

When the trial is over, the evidence is returned to the warehouse, where it is scanned to update the records and stored until the Property Section is ordered to dispose of it.

Results:
Suffolk County met its goal of improving what was already an excellent system. With the DOS-based system, it would take about two hours to track down items in the warehouse. With barcoding and the newer, Windows-based system, search time is reduced to 15 seconds.

Label printing also has improved. The 2746e has a top print speed of six inches per second and has a self-diagnostic feature that notifies the operator of printhead wear. Suffolk County again is counting on a single Zebra printer to produce the more than 70,000 evidence labels and invoices it needs each year.

“From the initial installment, the quality, clarity, and cleanness of the label have exceeded our expectations,” Beam said. “The labels don’t peel, and there is no problem with the machine printing out the numerous labels we need. Plus, it’s easy to change the ribbon and feed paper into the machine.”

The new system provides more convenience than before, without sacrificing any of the reliability or accuracy for which the county’s evidence management operations are known. The new Zebra printer provided the same qualities. Suffolk County’s continued trust is strong evidence of Zebra’s ability to meet the most demanding requirements.