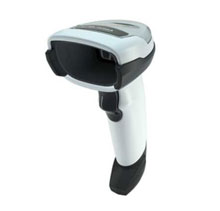 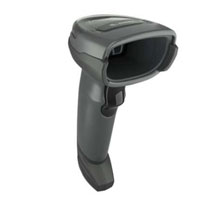 The versatile scanner that does more for you
Zebra's DS4600 series barcode scanners can give you the versatility and scanning performance you need to boost productivity and to remove down time in your operations. Great for applications in retail, light manufacturing, and health care. It can scan barcodes in nearly any given conditions. Count on the dependable scanning with easy setup and management. Right out of the box, the scanner is configured for the applications that you use everyday while auto host detect cables automatically and select the right host interface.
Zebra DS4608-HCBU2100AZW Overview

VERSATILITY THAT DOES MORE FOR YOUR HOSPITAL

Whether healthcare workers need to scan an ankle bracelet to confirm a newborn's identity in the NICU, track specimens in the lab or scan an IV bag to record time and dosage, the DS4600 Series for Healthcare can do it all. This versatile scanner accurately and easily captures virtually every barcode type found throughout the hospital. Its disinfectant-ready housing can withstand constant wipedowns at the point-of-care and an LED aimer is safe for use everywhere, including the NICU.

LET US TELL YOU MORE ABOUT THE DS4600 SERIES FOR HEALTHCARE

DESIGNED FOR USE AT THE POINT-OF-CARE

With disinfectant-ready housing, this scanner can handle regular sanitising with popular disinfectants to prevent the spread of infection. Screw and speaker holes are covered to mitigate the build up of bacteria. And night mode enables on-the-fly switching from an audible beep to vibration feedback when patients are asleep.

SAFE LED AIMER IS EASY ON THE EYES

FASTEST SCANNING PERFORMANCE IN ITS CLASS

Empower every associate to scan like your best associate. An 800 MHz microprocessor, high-resolution megapixel sensor and Zebra's exclusive PRZM Intelligent Imaging technology provide instant barcode capture on even the most challenging barcodes.

GET MORE VALUE WITH DATACAPTURE DNA

The DS4600 Series is powered by DataCapture DNA, a set of unique development, management, visibility and productivity tools that lower your TCO and help workers get more done each day. Dramatically simplify scanner deployments of any size with our industry-preferred configuration and management tools. Get the remote analytics you need to keep scanners up and running with visibility tools. Streamline more tasks with productivity tools that let workers capture multiple barcodes with one press of the scan trigger or single out one barcode from many.